The longest train route in the world runs from Moscow to Vladivostok. Taking a Trans Siberian train you will see Russia's great diversity with its multiple time zones, stunning landscapes and get a chance to meet many interesting people. Currently, two trains operate along on the route: the famous Rossiya Train and a regular train #99/100. Electronic tickets are available on both trains. Rossiya offers a higher comfort level and it travels faster, whereas train #99/100 has a slightly different route and it covers a longer distance. So, if you are really looking for the longest uninterrupted train journey on Earth, train #99/100 is your choice.

A journey on the Trans-Siberian Express train 'Rossiya' is the longest train ride in the world. It departs from Yaroslavsky train station in Moscow and after crossing two continents and six time zones, arrives in Vladivostok 6 days later. The train stops in approximately 90 cities.
The train has first, second and third-class carriages and a nice dining car with a special menu for passengers.
The Rossiya is considered one of the best trains in Russia in terms of service, friendliness of staff and upkeep. END_OF_DOCUMENT_TOKEN_TO_BE_REPLACED

Train 100/099 travels on the Moscow to Vladivostok route on a daily basis. The train covers 9300 km in 178 hours and stops in approximately 120 cities. This train offers lower ticket prices than a firmenny train #001/002 Rossiya. END_OF_DOCUMENT_TOKEN_TO_BE_REPLACED 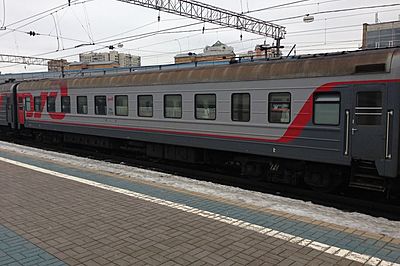