The 7622 km Trans-Mongolian is one of two routes carrying travelers from Moscow to Beijing, and the shorter of the two, taking only 5 days. While the other – the 8961 km, 6-day Trans-Manchurian – doesn’t require a Mongolian visa, the Trans-Mongolian runs directly through the country, including the capital city of Ulaanbaatar. Each route has only one train, running weekly, with a return Beijing to Moscow train traveling at the same time. 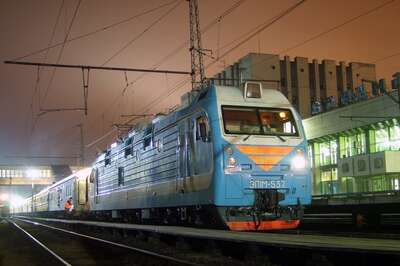 Do I need a Mongolian visa to travel from Moscow to Beijing by train?

As the #033/043 Moscow to Beijing train passes through Mongolia a visa may be required depending on your country’s relationship with Mongolia. Be aware that you cannot obtain a visa onboard the train.

How long is the Moscow to Beijing train ride?

On the Trans-Mongolian route (train #033/043 Moscow to Beijing), the journey takes approximately 5 days and 10 hours.

Does the Moscow to Beijing train have a dining car?

Yes, trains on the Moscow - Beijing route will have a dining car, with meals running from $5-$20. The menu changes periodically and is different for each train. Note that cash purchases require rubles (RUB) when the train is in Russia, tughrik (MNT) in Mongolia and yuan (RMB) in China.

Can I buy a hop-on hop-off ticket on the Moscow to Beijing route and get off in cities on the way?

No, railroad office rules require that you purchase tickets to each city you visit. There are no stopovers or flexible tickets. It is also recommended that you plan all stops on your trip and book tickets in advance, as ticket availability and price are less favorable the closer you get to the day of travel.

Can I bring my pet on the Moscow to Beijing train?

Yes, you can bring your pet in a 2nd class cabin, so long as you book all 4 berths. Make sure you also have the proper veterinary documents.

History of the Moscow to Beijing Trans-Mongolian Train Route

The route of the Trans-Mongolian Railway is centuries old. It traces part of the Tea Road that originated in the mid-1600s, and traversed thousands of kilometres from China, through the Inner Mongolia Autonomous Region and Mongolia, and on to Russia. Merchants travelled the trading route to exchange Chinese teas and other luxury goods like silk, porcelain, cotton and tobacco for Siberian furs. Tea was transported from Beijing to the important trade station of Zhangjiakou, where it was loaded onto camel caravans to be taken across the Gobi Desert, through Ulaanbaatar and Ulan-Ude, across Lake Baikal, to Irkutsk and beyond.

Before the Trans-Mongolian, the rail network in Mongolia was extremely underdeveloped and consisted of just two short routes. The Trans-Mongolian linked not only important cities within Mongolia, but connected the landlocked country with its powerful neighbours. Construction on the railway began in 1947 from Ulan-Ude to the town of Naushki near the Russian-Mongolian border, and in 1949 the line reached Ulaanbaatar. Thanks to good diplomatic relations between the People’s Republic of China and the Soviet Union, the Trans-Mongolian Railway was next extended across Gobi Desert into China in the mid-1950s.

The Trans-Mongolian was inaugurated in full in 1961, facilitating the fastest possible train journey between Moscow and Beijing! But this wasn’t to last. Due to conflict between China and the USSR the Trans-Mongolian was closed off on the Chinese end during the 1960s, and reopened only in 1980s. The consequences of this are still visible today as each carriage has to have its wheel frames changed to a different gauge at the Mongolian-Chinese border.

What to see on the Trans-Mongolian Railway

Ulan-Ude: The capital of the Republic of Buryatia, located close to the south-eastern shore of Lake Baikal. Ulan-Ude is the spiritual center of Tibetan Buddhism in Russia and is home to the Ivolginsky Datsan, the largest Buddhist temple in Russia.

Ulaanbaatar: Almost half of Mongolia’s population live in the capital city, which was founded as a nomadic settlement. Here are plenty of fascinating landmarks such as the National Museum of Mongolia, Choijin Lama Temple Museum, Winter Palace of the Bogd Khan, Museum of Mongolian Dinosaurs, and the Mongolian National Modern Art Gallery.

Datong: A large Chinese city home to the UNESCO-recognized Yungang Grottoes: a complex of ancient Chinese Buddhist temples situated in more than 250 caves, which is considered a masterpiece of early Chinese Buddhist cave art.

Beijing: In the Chinese capital you can discover thousands of years of Chinese history and culture in the Forbidden City, Tiananmen Square, Temple of Heaven, Great Wall of China and much more.