The Rossiya has the distinction of running the longest train route in the world – 9259 km, from Moscow to Vladivostok. Running since 1966, the Rossiya departs daily from Moscow’s Yaroslavsky station and crosses six time zones as it travels over most of Russia, stopping in some 140 cities along the way and passing the famous Lake Baikal. The journey takes 7 days.

With a color scheme based on the Russian flag (inside and out), the Rossiya has a reputation for friendliness, quality of service and overall condition that ranks among the best Russian trains. In September 2016, images of Far Eastern leopards and Amur tigers were added to two of the Rossiya trains to raise awareness and help protect these rare animals.

The Rossiya has 2nd and 3rd Class cars. The 2nd Class tickets book passage in a compartment with 4 berths (2 upper, 2 lower), a TV, an access control system, and a 220V socket. Bed linens are also included in the price, and price options with and without meals included are also available. 3rd Class (“platzkart”) carriages have 54 berths in an open carriage, divided between upper and lower berths. The train also has a dining car and a carriage with showers usable by passengers of either ticket class for an extra fee. 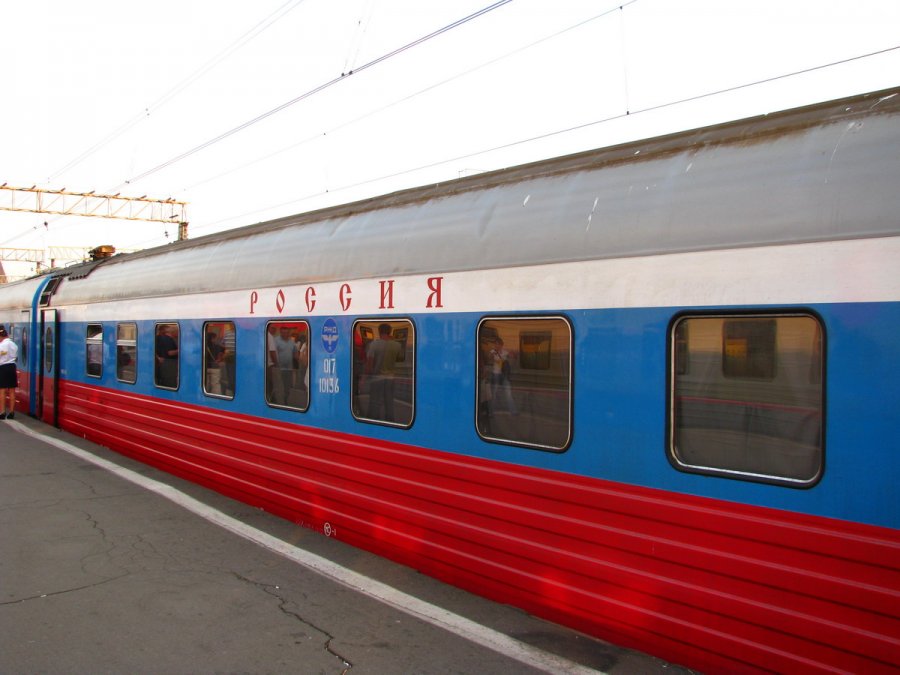 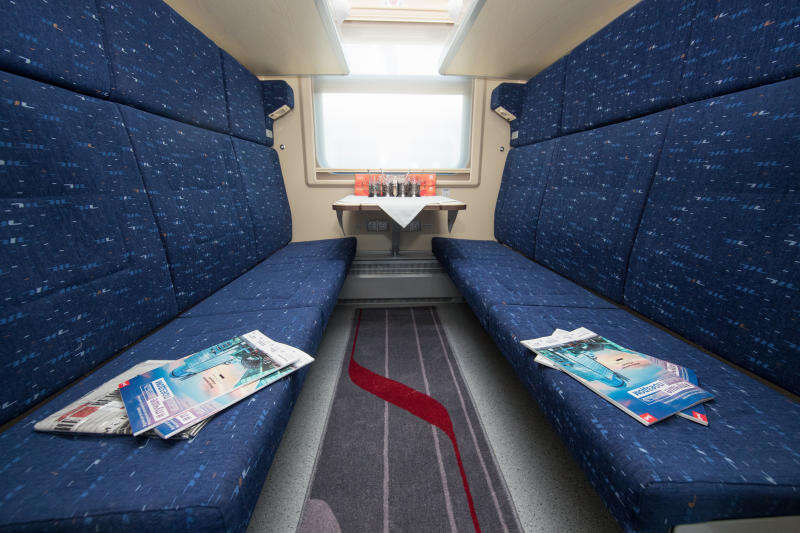 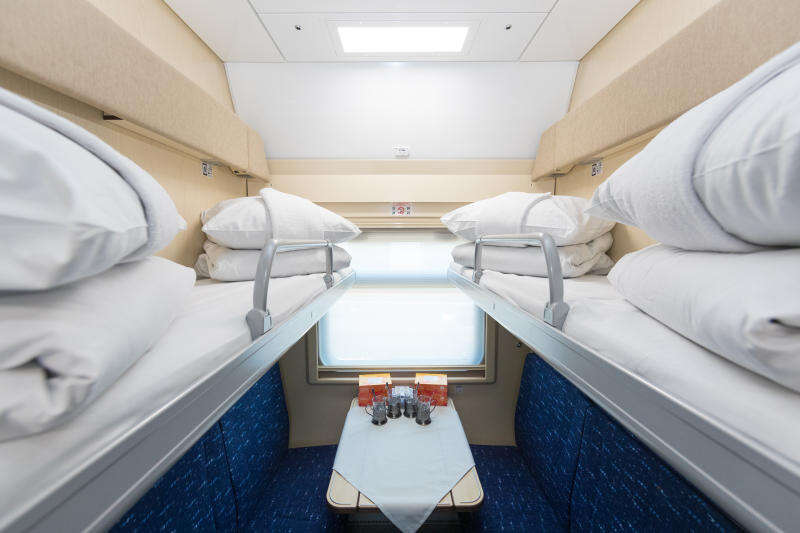 History of the Rossiya Train

The most famous of all trains in Russia is probably the Rossiya, which runs on the Trans-Siberian Railway. The total line is 9,288 km long, and it takes the Rossiya train a little more than six days to complete a journey.

The Trans-Siberian in Imperial Russia

In building a cross-Russian railroad the goal was to integrate the east economically with the concentrated population in the west. The east offered natural resources and it was hoped that the population would develop. The Trans-Siberian was begun in 1891 for these ends.

The first rock and earth were moved by young Tsar Nicholas II when construction began.

Construction of the railroad took tens of thousands of laborers. The challenges were stubborn and ample: permafrost, mountain ranges and vast forests had to be conquered to lay tracks. Swamps, rivers and the freezing eastern winter added to the fun.

The railroad cost the equivalent of $25 billion dollars today, which was 1 billion 455 million roubles at the end of the nineteenth century.

From the Ural city of Chelyabinsk to Vladivostok, the railroad was built in many stages.  Finally, the Circum-Baikal Railway solved the problem of bypassing Lake Baikal. Prior to its completion, cargo and passengers had to cross the lake by boat in summer. In winter, a temporary railway was constructed on the frozen lake. In Mysovaya they could take another train.

The Trans-Siberian railway was completed in 1905. The eastern tracks linked to existing routes between St. Petersburg, Moscow and Chelyabinsk. Nevertheless, the Chinese Eastern Railway had been built with a shortcut through Manchuria that would prove problematic for decades to come. Trouble struck right away for the Trans-Siberian, as the Russo-Japanese War (1904-1905) showed the railroad’s vulnerabilities. As a preventative measure that didn’t involve foreign territory, which had been an original plan, Russia decided to build the Amur Railway. Whereas the Trans-Manchurian cut through between Chita and Vladivostok, the Amur went from Chita via Khabarovsk. A bridge over the Amur River alone took three years to build, and the entire project was complicated and pricey. However, it brought peace of mind because it didn’t cross borders.

Upon completion, four trains left weekly from St. Petersburg and took twelve days to arrive in Vladivostok. First class on this train was quite an experience, with grand carriages decked out in mahogany, bronze and velvet. A traveling library, piano and sports area completed the first-class experience. It came with a price tag however: 148 roubles 15 copeks. This was roughly the equivalent of an industrial worker’s salary for six months! The first-class carriages are on display in St. Petersburg’s Railway Museum.

The Trans-Siberian and Rossiya train in Soviet times

The Russian revolution and Civil War did not bode well for the railroad. It reopened in 1925 in a more humble form. Only two trains ran each month.

Once the Rossiya train began operations in September of 1966, the Trans-Siberian could rekindle its former glory. Bright red with white enamel letters, the carriages made an impression by advertising “Rossiya” and “Moscow – Vladivostok.” The service was of great quality and trains left daily. Central heating, wool duvets and a kettle with glasses for tea in each cabin guaranteed warmth even when flying through Siberia at high speeds. A children’s carriage, foam mattresses, newspapers and political literature were other features. Komsomol Youth Brigade ran the service onboard.

The Trans-Siberian and Rossiya train today

At the turn of the century, the Rossiya received a makeover. The tricolor of the Russian flag and the state emblem took the place of the cherry red and white design. Over the next few years, design firms took on the job of creating new carriages.  Eventually they won the prize for the best interiors in the nation. In 2020, the additions of new electronic features upped the quality of the trip significantly. With power outlets, electronic door locks and access to a microwave and a fridge, the Rossiya started to rival a hotel room. Also, hot showers in every carriage are a luxury that many other trains still lack.

The Rossiya transports passengers through what can become a fascinating tour of some of Russia’s best sites. The list of cities it passes through includes Yaroslavl, Kostroma, Yekaterinburg, Novosibirsk, Irkutsk, Ulan-Ude and Khabarovsk. The final destination is of course Vladivostok. Meanwhile, the other option for a Trans-Siberian train reaches Yekaterinburg by passing through Vladimir and Nizhny Novgorod. This is the unbranded #061/062.

The Rossiya train has maintained its popularity despite the advent of planes that travel the same route. Although the prices are comparable, the journey itself is not for visitors to Russia. Disembarking in fascinating places is the joy of the Rossiya.