The journey from the port city of Vladivostok to the Russian capital of Moscow is a 6–7-day trip through the vast expanse of Russia, from the taiga and Lake Baikal to the pine forests and historic cities of the west.

Two trains, including the Rossiya, run between these cities on this Trans-Siberian Railway, both offering electronic tickets for optimal convenience. The same trains operate on the Moscow to Vladivostok route.

How long is the train ride from Vladivostok to Moscow?

How long are the train stops along the Vladivostok to Moscow route, and would I have time to tour each city?

Stops vary from 20-50 minutes for larger cities to as little as a few minutes in small towns. You will only have time to visit the shops or facilities in the station, at most.

Can I get an all-male or all-female cabin?

Yes, gender specific as well as mixed cabins are available in both 1st and 2nd class.

Are there showers on the Vladivostok to Moscow train?

Some trains on the Vladivostok to Moscow route have showers available for a small fee ($5 US). Ask your conductor.

What are sleeping arrangements like on the Vladivostok to Moscow train?

The History of Vladivostok to Moscow Railway

The Trans-Siberian railroad project was so important that Russia inadvertently went to war in pursuit of it. Tsars participated in an intergenerational struggle and men took on nature in pursuit of it.  The completed Vladivostok – Moscow train line is that light at the end of the tunnel.

Tsar Alexander III is credited with the notion of expanding the Trans-Siberian railway to its present form. The monarch sought to create an unbreakable chain in his empire from his European capital in Moscow to his Asian naval port in Vladivostok. He agreed with Aristotle that ‘the whole is greater than the sum of its parts’ in terms of railway building. This Eurasian network of railways like the Transbaikal and Mid-Siberian needed to be fused together to create a mightier one.

A War Over Warm Water

The Russo-Japanese war was largely fought over a warm-water port in Manchuria called Port Arthur. Frozen Russian ports hurt trade and naval activity. The Chinese already rented out this port to Russians and even agreed to build jointly with Russia a railway linking Port Arthur with Moscow. The Japanese were not thrilled with this arrangement.

As part of the original agreement, the Chinese had secured the rights to construct a southbound line from the Transbaikal region to their Liaodong Peninsula. However, when tensions between Russia and Japan broke out into all-out war in 1904, the Chinese reversed course and set up an alternative route to go from the Amur Railway to Vladivostok. Therefore, the completion date of the Trans-Siberian Railway was pushed back to 1916 and construction was limited to Russian territory only.

The following three lines contributed greatly to the building of the world-renowned Trans-Siberian railway. Russia needed help from the neighboring nations of China and Mongolia since building abroad was severely limited after the Russo-Japanese war.

Trans-Manchurian Line: This historic line picks up near the town of Tsarskaya, which is a few hundred miles to the east of Lake Baikal. Heading southeast, this rail line enters China near the town of Zabaikalsk and continues southward to the megacity of Beijing. Since the conclusion of the Second World War, the Trans-Manchurian line has been under Chinese control. It’s called the Ch’ang-ch’un Railway in Chinese and operates as a set of spur lines running off the Trans-Siberian main line. It took from 1974 to 1989 to finish the construction of these spurs because they traverse some of the world’s most treacherous swaths of lands full of swamps, permafrost and taiga.

Trans-Mongolian Line: This remarkable line was constructed in the years between 1940 and 1956. Its entry point begins at Lake Baikal’s eastern shore. The majority of its runs are between the cities of Ulan-Ude and Beijing. Heading southeast through the picturesque nation of Mongolia, tourists are blown away by the breathtaking scenes of the Gobi desert.

Baikal Amur Magistrate*: Making its debut in 1984, this notable line begins at Taishet and ends near the Pacific Ocean. It meanders northeast towards Khabarovsk, where voyagers finally reach the port city of Sovetskaya Galan. This spur runs parallel to the Trans-Siberian main line, measuring some 3843 kilometers in total length. (*Don’t bother looking online to book this route, there's no dedicated train serving this particular line. One may explore it by taking other trains or a local bus running on part of this route.)

Building it for Russia

Twenty-five years after his original proposal, Tsar Alexander III demanded no more talk, just action from his advisors. Three teams of land surveyors were finally sent to scout the field in 1887. By keeping out foreign money and influence, the tsar gave the project a very Pro-Russia, patriotic feel. He stressed that the project would be built using only Russian tools, material and people.

Construction began in earnest in February of 1891, simultaneously in the cities of Chelyabinsk and Vladivostok. At this point, the tsar was excited about the progress of the project. Nicholas II was sent by his father to christen the project’s launch. He stressed to him the importance of linking the rich resources of Siberia with the railway network itself. The future tsar was an excellent choice to spearhead the project with passion. He did a great job and baptized the construction by laying the first rock and silver plate himself. Therefore, the date May 31, 1891 holds a special significance in rail history.

Besides the geopolitics, the real fight for the project was against the Siberian natural elements. The workers had to survive through no-man’s land as well as through a particularly dangerous area full of taiga. This Taiga was a tough enough challenge, but coupled with large rivers, deep lakes and permafrost, these men were up against some impossible odds. These laborers literally had mountains standing in their way. The Lake Baikal region was surrounded by them. Workers used handmade picks and axes as well as dynamite to blow holes for the tracks to get through. The line wouldn't exist without the tunnels and tall bridges constructed by these men, out of necessity. Although a slew of issues like manpower, finances and logistics kept cropping up, by sheer grit, perseverance and national pride these journeymen continued to make some 600 kilometers of track year after year.

Light at the End of the Tunnel

Once it was finally completed, everyone saw their sacrifice bearing fruit. This symbol of national pride also contributed to the country’s well being in terms of expanding economic growth and international trade. Losing the Russo-Japanese war showed the glaring deficiencies of the railroad network. In time, authorities implemented solid reforms to address these issues. By October of 1916, railway communication was available from Chelyabinsk to the Pacific coast. It took time for train service to be restored after the end of the Civil War. However, once it was in March 1925, there was no more looking back, only forward and the Vladivostok to Moscow train route was complete. 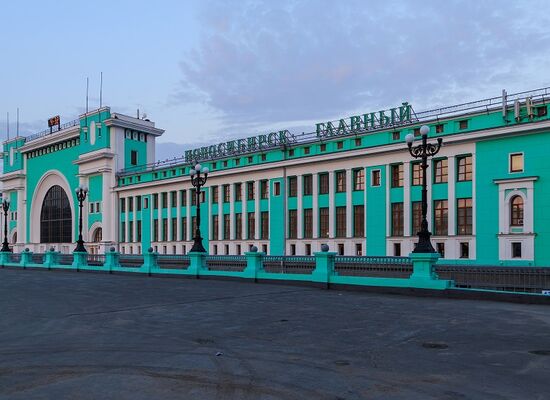