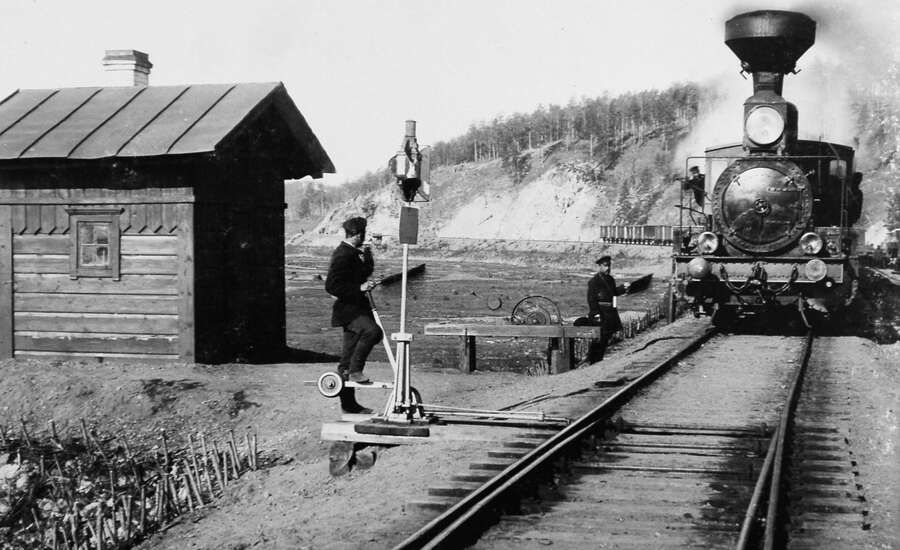 The Trans-Mongolian Line was built from 1940 to 1956 between Ulan-Ude at Lake Baikal's eastern shore and the Chinese capital Beijing. From Ulan-Ude the tracks go south, towards Mongolia, crossing the large Gobi desert and finally ending up in Beijing. This route is a mere 7867 kilometers long (Moscow - Beijing).

The Trans-Manchurian Line coincides with the Trans-Siberian as far as Tarskaya, which is a few hundred miles east of Baikal. From Tarskaya, the line heads southeast into China near Zabaikalsk and makes its way down to Beijing. This route is a 9001 kilometres long (Moscow - Beijing).

The Baikal Amur Magistrale (BAM) was officially opened in 1984. It starts in Taishet and stretches to the Pacific Ocean northeast of Khabarovsk, at Sovetskaya Galan. The 3843-kilometer-long BAM runs several hundred kilometers north of and parallel to the Tran Siberian Railway. This route is not advertised or found in any travel agencies because there isn't one train that runs the entire track. If you do ride this railway, you have to hop on different trains and sometimes even take a bus to get to your destination. 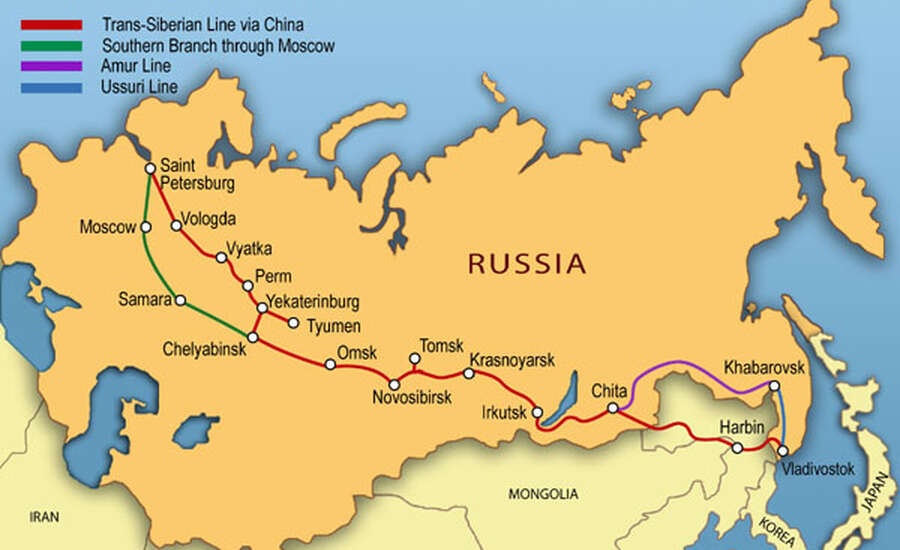 The impetus for the Trans-Siberian came mostly from the economic problems associated with Russia's size, but, as the project developed, it became the focus of national pride. Despite these worthy motivations, the great railroad was a long time in planning, and it was constructed even more slowly.

Already in the middle of the nineteenth century the building of a railroad to the outskirts of Siberia was proposed, but that was only the beginning of the story. Foreign companies were among those proposing different kinds of railway projects in the nineteenth century, but the Russian Tsars didn't really want foreign influence in Siberia and the Far East. So, finally, it was decided to build the road using funds from Russia's treasury.

In 1886, 25 years after the railway was first proposed, Emperor Alexander the III finally admitted that he had already heard enough ideas on the project - it was finally time to start doing something about it. Thus in 1887 three research expeditions were formed and sent to explore the lands where the Trans-Siberian was meant to run. Continuing with the nationalist bent demonstrated in the rejection of foreign funds, it was declared that "Siberian Railroad is a major people's affair and it has to be done by Russian people and from Russian materials". Construction began In February 1891, starting simultaneously from Chelyabinsk and Vladivostok. 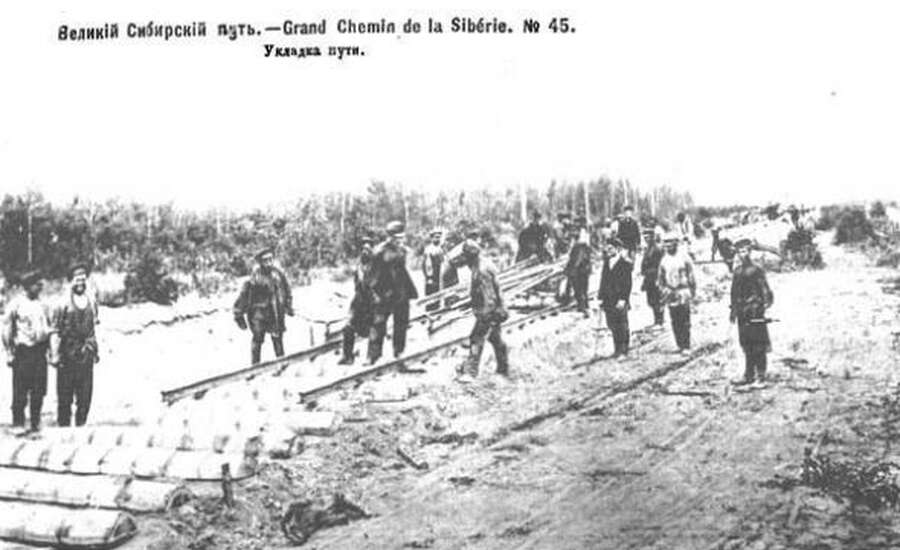 Alexander III, enamored with the idea of the Trans-Siberian, instructed his son to start the building of the great railroad through Siberia "in order to unite the rich yields of Siberian nature with the network of Russian railways". Young Nikolay Alexandrovich accomplished his father's order, and put the first rock and the silver plate into the ground himself. On May 31 1891 the project's initiation was marked with a special church service, and construction began.

The whole project was hampered by harsh climactic conditions. Almost the entire length of the railroad was built through thinly-populated areas in the impassable taiga. The huge Russian taiga included additional challenges in the form of the many large rivers that run through Siberia, many lakes, and districts that were either extremely waterlogged or filled with permafrost. The most exceptional difficulties the builders experienced were in the Baikal region, where it was necessary to blow up mountains for the construction of railway tunnels as well as construct railway bridges to traverse the canyons of the many mountain rivers that flow into Lake Baikal. 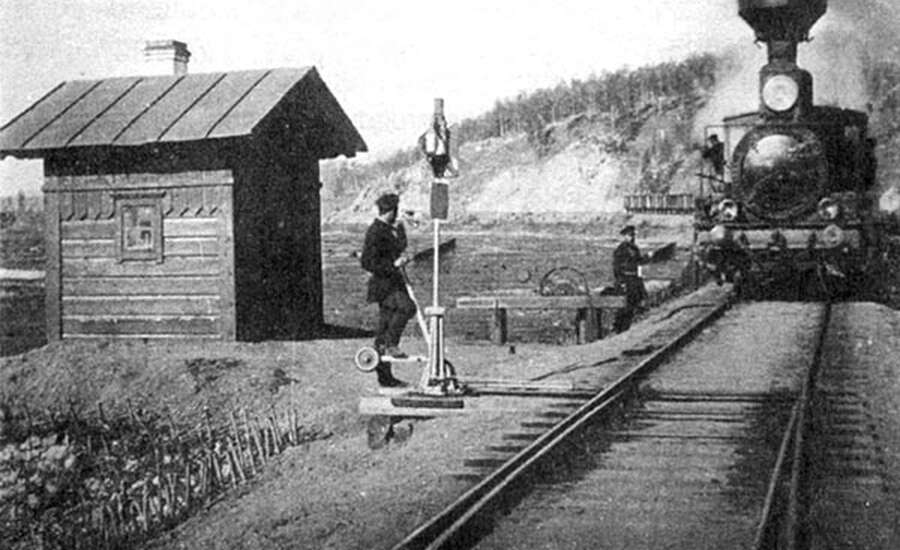 The unforgiving terrain was not the only difficulty encountered. The cost of construction was enormous, and the supply of man power problematic. The central cities supplied many of the specialists required for the project, while the many thousands of common workers who took part in the construction came from the ranks of exiled prisoners and soldiers.

Despite these challenges, up to 600 km of railway road were laid every year. The incredibly fast pace of the construction - it was completed in a mere 12 years - amazed the world. With the help of 7.5 thousand kilometers of railroad, Europe was finally connected to the Pacific Ocean.

As soon as the Trans-Siberian was built, it began to have a significant impact on economic development, and contributed to the acceleration and growth of the circulation of goods. However the Russo-Japanese war (1905-1906) began, and the railroad's shortcomings became obvious. During the war, the railroad's capacity was only 13 trains per day. After the war a few steps were taken to increase capacity, however it became obvious that speed of the trains needed to be augmented in order to achieve this. The wooden rails were changed to metal ones, thus increasing the number of trains as well as the size of carriages. The Russo-Japanese war also prompted the government to make the line continuous all the way from Vladivostok through all of Russia. 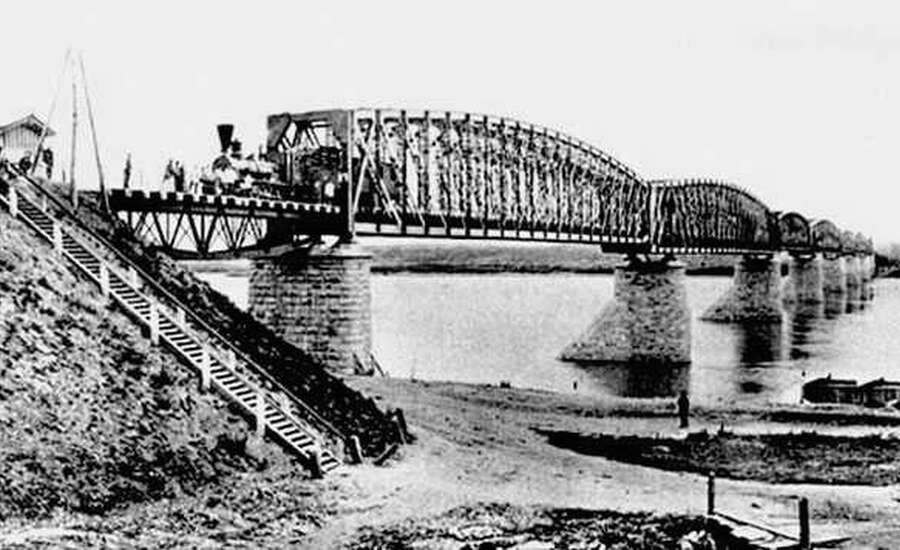 The railway communication from Chelyabinsk to the Pacific Ocean through the territory of the Russian Empire was officially completed in October of 1916, after the Amur Railway and Amur Bridge were completed. During WWI the Trans-Siberian's condition deteriorated, however, the most tremendous destruction occurred during the Civil War. A huge number of trains and cars were destroyed; many bridges were burned and blown up. Nevertheless, right after the Civil War ended reconstruction began immediately. Most of the repairs were completed during the years of 1924 and 1925 and in March 1925 services recommenced, and - amazingly - have continued without a break until the present.

The Road to the Future

A Russian writer once wrote: "If you glance to the globe from the height of the bird's flight, you'll see a huge cross on the Earth with the base being formed by the Great Trans-Siberian Railroad from Brest to Vladivostok and across it the river Volga runs. Great Russia holds on to this cross!"

To underline the significance of the Trans-Siberian today it is enough to say that the 100 year anniversary in 2001 was celebrated widely. Its one centenary marked a sort of re-birth for the railroad.

Among the celebratory events was the transportation of some cargo from Japan to Vladivostok, then to Germany. The trip took less time than transport by sea would have, and after this experiment it was decided to use the railroad more often since it had proved itself more expedient. This helped in turn to fuel more trade using the Trans-Siberian to carry freight from South Korea. This trade has has increased dramatically since the anniversary.

The centenary also marked the one-thousandth train journey to Finland via the Trans-Siberian. The train started in the Far East city of Nakhodka and arrived at the Finnish border after just nine days of travel. Believe it or not, that's actually an impressive time for such a distance - we'll take their word for it.

On an anecdotal note the anniversary marked the first time that the "Great Siberian Railroad" was called "The Trans-Siberian" by the Englishmen. At the moment the Trans-Siberian is the longest railroad in the world and is registered in the Guinness Book of World Records. Regardless to the popular expression of Kipling: OH, East is East, and West is West, and never the twain shall meet, the Trans-Siberian has facilitated just such a meeting.

The problem of optimizing the Trans-Siberian's capacity remains. The Trans-Siberian is a vehicle for communication between two continents. Cut it from one side and the flow of freight dies. This is the case now, as the Trans-Siberian is blocked by shipping companies in the far east. Resolving this problem is challenging, but good connections with South Korea and other eastern countries with rapidly developing and improving economies could help. While sea lanes are now taking the majority of the freight traffic between the east and west, if the Trans-Siberian can improve and modernize its services there is a good chance that the Trans-Siberian could become a highly-competitive alternative to sea transport.

For travellers, the most important issue is crossing the borders, especially in the western part of the route! (See our Travel Diary - An Insider's Guide to the Trans-Siberian).

From Alexander to Vladimir

What was Alexander III. "the father of the Trans-Siberian." thinking in 1891 when he was signing the order to start building of the railroad? Officially, as we know, he was thinking about "uniting the rich natural gifts the Siberian regions with the network of the inner railroad". A lot of time has passed since then and the railroad has changed with the times. Nowadays, the President of Russia, Vladimir Putin, occasionally travels to the Eastern countries such as North Korea using the Trans-Siberian in preference to flying. Maybe this is because he has a traveling (railroad) last name - Putin (Puteytzi) which in Russian means "to travel"? The North Korean leader Kim Jong Ill has also traveled by the Trans-Siberian and was quite impressed by its speed and service. Above all, there is a possibility that the Great Trans-Siberian will turn into a powerful Eurasian transit - a sort of rebirth of the famous Great Silk Road. This road will connect Sakhalin Island with the continent as well as with Hokkaido. At the moment the engineers are debating whether bridges or tunnels are the better course for the railroads extension. The future of the great railroad seems bright, but only time can tell how things will turn out, a lesson which Russians know well.